Impressive in its abundance, energy density and liquid transportability. These unique features have made it ubiquitous to heavy transport and traction in the 20th and 21st centuries.

This powerful substance now runs the agricultural machinery that feeds 7.5 billion people worldwide and overall it does the work equivalent to having an extra 50 billion manual labourers on the planet. Every product in existence now relies on diesel, at some stage of its journey, to reach the market. Diesel’s grip on our world is impressive indeed.

Pacific Island Nations entered the diesel powered global economy without much say in the matter and today they pay the highest price in the world for their participation. As the price of diesel reaches all-time highs and continues to rise steadily, so do global temperatures and sea levels. Diesel’s immense contribution to the climate crisis, which already disrupts life in Pacific Island Nations and will continue to do so for centuries to come, makes it completely unviable as a future fuel. This raises questions; when diesel duly departs, what will fill the void that it leaves behind? And is this “solution" practical, affordable and appropriate for the Pacific? 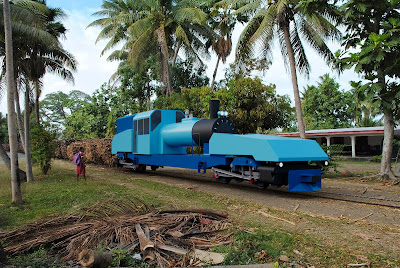 Mackwell Locomotive Co, a New Zealand based company, may offer a pragmatic solution to this predicament.

They specialise in the design, development and construction of zero-carbon locomotives which run on solid-biofuels. Solid-biofuels are regenerative, transportable and completely carbon neutral as the next season’s growth cycle absorbs the previous season’s emissions. Local communities can purpose grow them as a market good or they can be sourced from industry waste streams. In the Pacific Region, wood-chip, coconut husk and sugarcane bagasse can all be sourced in bulk from the forestry, coconut and sugar industries. 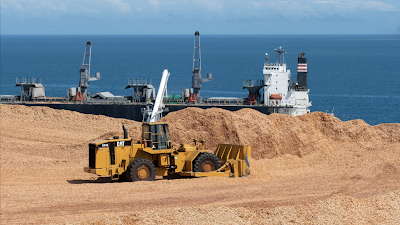 Solid-biofuels require minimal effort to produce. You simply grow, tend to and harvest the crop before processing it (e.g. through a chipper) to make it ready for consumption. As a result, solid-biofuels typically have an Energy-ROI of >25:1. This means for every unit of energy invested in producing the fuel, you will receive at least 25 units of profit energy back. Liquid biofuels in comparison require complex factories to refine energy crops and provide an unsustainable Energy-ROI of 2:1 or less.

Low Energy-ROI fuels make little economic sense because they require significant investment and resources to effectively scale up. Liquid biofuels for example require huge amounts of fertile arable land and expensive fossil fuel inputs to return a relatively small amount of useful energy. It is the ‘profit’ energy derived from high Energy-ROI sources that is useful. It powers society - allowing for education, healthcare and infrastructure. It enables communities to flourish and is vital to local industry, commerce and trade. Low Energy-ROI sources simply cannot provide sustenance and prosperity. They do not make biophysical or economic sense.

The Mackwell Locomotive is the most efficient way to harness and convert high Energy-ROI solid-biofuels into traction. Yes, it is a steam engine, but it is a steam engine like no other. It has been completely re worked and redesigned, solving the major problems associated with the archaic “iron horses” of the past. Mackwell boilers are incredibly efficient safe and pragmatic. They will reach full pressure in 20 minutes rather than 8 hours, cannot explode and utilise complete combustion which eliminates all spark and smoke emissions. 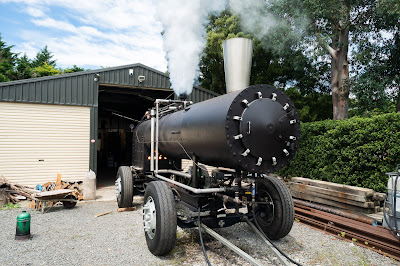 In the Pacific Region, Fiji’s Sugar Industry which produces large quantities of bagasse and operates a 300+km rail network immediately comes to mind. As such, Mackwell Locomotive Co. have identified a strong business case for their ZeroLoco to decarbonise sugarcane transport. A proposition best summed up in their video, "Cane Trains Beyond Diesel". 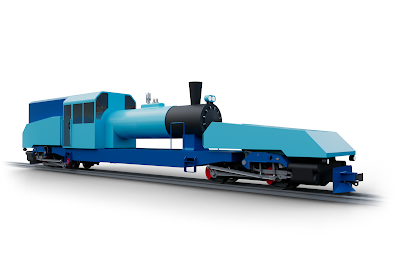 The Advanced Steam Technology which powers Mackwell Locomotives is robust, efficient and simple-to-maintain. The 400hp boiler which Mackwell Locomotive Co. built in 2019 has been tested extensively over the past 3 years. This demonstrably successful boiler now forms the basis of the ZeroLoco prototype.

In comparison to an equivalent diesel locomotive in Australia, the ZeroLoco will:

These margins are expected to be even greater in Fiji, due to local differences in the cost of diesel and wages.

The ZeroLoco offers the opportunity for a NZ company to enter into a symbiotic partnership with the people of Fiji, to trial an innovative zero-carbon locomotive. The technology is affordable, resilient and appropriate for the Pacific, promoting a circular economy, energy self reliance and political self determination.

William Bowden is an employee of Mackwell Locomotive Company. He holds a PGDip in Science Communication and a BSC in Geography from the University of Otago, New Zealand.

Popular posts from this blog

Leaving None Behind In Shipping’s Transition To Green Fuel 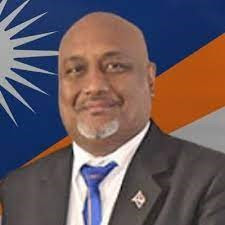 H.E. Ambassador Albon T, Ishoda, Republic for the Marshall Islands Statement to "The Getting to Zero Coalition [1]    7th December Webinar:  Synthesis of Shipping decarbonisation at COP26 and MEPC77.   What does equitable transition look like in practice? That is a very good question and one that none of us have the answer to. Not yet! But it is critically important that collectively we find that answer. And find it relatively quickly.   Mine is an atoll nation. 2m high. For us, the most climate vulnerable of all, it’s a very simple equation. Stay under 1.5 or stop being a country. Whether that means we will still have a flag to fly over a significant proportion of the world’s fleet is another question.   At the International Maritime Organisation, we are finally coming down to the business end of the wedge. What is the Market-based Measure shipping will adopt? Will it really close the price gap with alternative fuels? And if it does, the most contentious question of all - what
Read more 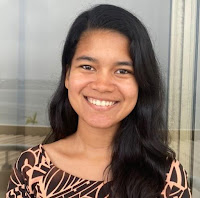 Atina Schutz is a law student at the University of the South Pacific who has been closely following the IMO negotiations  The shipping industry accounts for 3% of all CO2 emissions, and is on track to grow as high as between 50% and 250% in 2050. At the International Maritime Organization (IMO), discussions on the reduction of greenhouse gas emissions (GHG) from ships are ongoing. While progress is slowly being made, the main thing people in the Pacific, and everywhere, should be watching is equity in the progress of GHG reduction debates.  In the global market, the Pacific is at a disadvantage. Our small economies, with distantly spread islands, are very far from the global market, which is heavily concentrated in the Global North. When it is time to decarbonize, that disadvantage will be exacerbated. As decarbonization is a highly costly and technical process, the cost will fall on governments already struggling to provide other equally important services to their citizens. Consequen
Read more

OTEC – what is and why should we consider it? 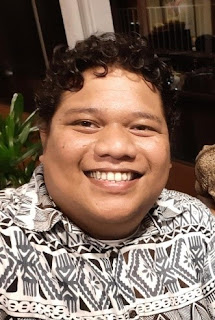 Mr. Wayne Raymi Kijiner is the  President of the Marshall Islands Student Association, University of the South Pacific, and  Undergraduate: BSc Double Major Electrical/Electronic Engineering & Physics   T here is a new but old technology making its way around the green energy discussions. I'm referring to Ocean Thermal Energy Conversion (OTEC). The technology has been understood since the 1800s, but it wasn't until the last 15 years that significant advancements were made and are currently being developed for improved designs.  What exactly is OTEC, and how does it work? In a nutshell, it is the use of the temperature difference between the surface and the deeper parts of the ocean to heat and cool a working fluid (usually ammonia).  Because the working fluid has a low boiling point, there is no need for a significant temperature difference; it should be at least 20°C. The working fluid is then heated using surface ocean water, causing it to turn into vapor pressure, which
Read more